Commemorating Chinese Railroad Workers: Linking the Past to the Present 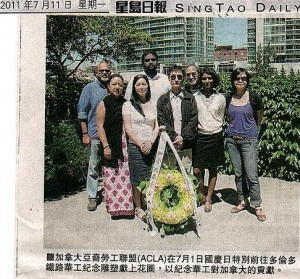 As we commemorate the Chinese railroad workers, what have we learnt from the past?
The images of Chinese workers toiling under deplorable working conditions are a stark reminder of Canada’s hidden and racist past. Over 17,000 workers came to toil on Canada’s Railway. Approximately 4,000 of these men did not return home. Chinese workers were given the most dangerous, dirty and deplorable occupations during the building of the railroad which laid the bedrock for the expansion of Canada. For its part, Canada has apologized for its past action through the use of symbolic gestures.

While today we commemorate the sacrifices and contribution of the Chinese railroad workers as an important Canadian treasure, as a country we have to ask ourselves what have we learnt from the past? If we scratch beneath the surface of ceremonies, good intentions and tokenism, are today’s racialized immigrants treated any better than those that came before us? The Asian Canadian Labour Alliance argues that much more still needs to be done in the area of race and labour in Canada. Racialized and immigrant workers today face greater precarious working conditions than workers employed in Canada a generation ago. Last year the Chinese Canadian National Council (CCNC) in conjunction with the Chinese Interagency Network (CIN) released a report highlighting specific experiences that Chinese workers face in Toronto. The report concluded that the protections enshrined in existing labour laws and practices were largely unknown to the Chinese immigrant workers who were interviewed. Interviews recounted worker’s experiences of working over 70 hours a week and earning only $4 dollars an hour. The report found that 40% of interviewees did not know what the current minimum wage was in Ontario and more than two thirds of workers were not aware of rights under overtime pay and holiday pay. These findings are similar to findings undertaken by other communities showing a greater divide between those with jobs with protection and those without. Workers are not simply facing abuses in their wages, but the work undertaken by immigrants also tends to be more dangerous.
Workplace injuries and fatalities are still a tragic daily reminder of the conditions facing workers across Canada. In 2009 close to 1,000 workers died at work. According to the Workplace Safety and Insurance Board in 2010 over 300 workers died at work while nearly 200,000 others were injured in Ontario. The media has reported numerous workplace fatalities involving racialized and immigrant workers.Immigration laws have always placed restrictions on immigrants. The Chinese railroad workers were not permitted to apply for residency in Canada. Threats of deportations, and the constant prospect of not being able to provide for their families coerced many to work under deadly conditions. Over one hundred years later our labour and immigration laws still work in tandem to deny hundreds of thousands of workers decent working conditions in Canada. In 2010 Canada accepted more temporary foreign workers (migrants employed under similar restrictions as the railroad workers) than those coming to Canada as permanent residents. Hundreds of thousands more work without status or under a precarious immigration status that may deny them the ability to exert labour and other civil rights. In 2007 two Chinese migrant workers were crushed to death when a tank collapsed upon them in Fort McMurray, Alberta. The migrant workers were employed by Canadian Natural Resources Ltd who were subsequently charged with 53 violations under Alberta’s Health and Safety Act. The migrant workers employed under the auspices of Canada’s ‘Temporary Foreign Workers Program’ (TFW) like the over 280,000 others currently in Canada cannot exert workplace rights and many are tied to employer specific work permits thus denying them labour and social mobility in Canada. That is, although they may be working in Canada, they are not protected under Canadian law.

To honour the memory of the Chinese workers, and the thousands of others who have died because of dangerous working conditions, it is imperative that labour laws be reformed to protect the most marginalized, the most vulnerable workers in our communities. Enforcement of our laws should not be incumbent of the disadvantaged being left to fend for themselves but by both levels of governments providing the following (1) proactive inspections of workplaces (2) loosening the obstacles on workers to organize and to bargain collectively. At the Federal level we need to regularize the thousands of temporary foreign workers and provide status to those who are undocumented. We must ensure that workers are not indentured in their workplace, not at the mercy of their employers, and not facing the ever present threat of deportation for demanding safe and decent working conditions. 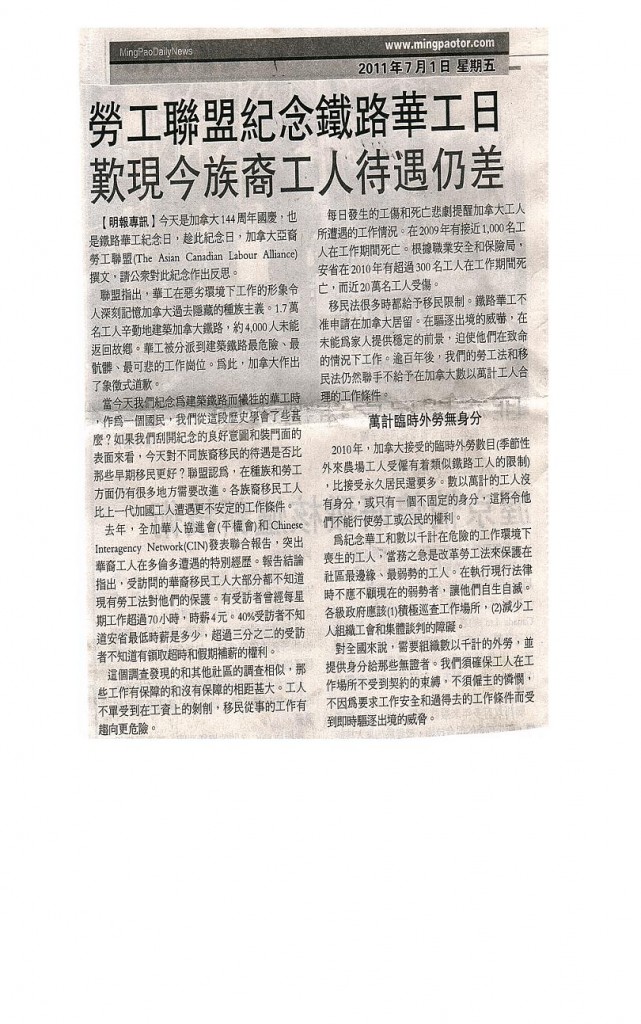