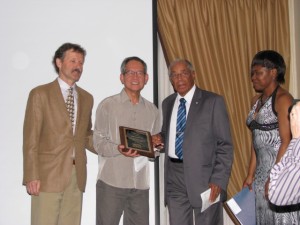 For over 30 years, Brother Jojo has been a committed community and labour activist across North America and the Philippines champion numerous causes from anti-imperialism struggles to fighting against racism, an important ally to the immigrant and migrant workers struggles and countless other struggles.
Within this City Jojo has a long history of activism and organizing from previous work in organizations such as the Cross Cultural Communication Centre to his most recent role as Executive Director of the Labour Education Centre (LEC) Jojo has been instrumental in opening up space for communities that have historically been excluded from the labour movement.
Despite his ‘retirement’ from the labour movement, Brother Jojo continues to be an active member of ACLA supporting our activities and providing critical insight on the struggles of Asian Canadian workers (Both unionized and non- unionized).
Brother Jojo achievements are numerous, as an elder who has accomplished so much we think that he is an excellent candidate to receive the Bromley Armstrong Award.