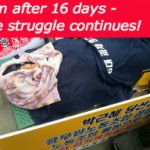 The President of the Korean Government Employees’ Union (KGEU), Kim Jungnam, launched a hunger strike in the streets of Seoul outside the offices of the Presidential transition committee on15 January.

He is protesting the sacking of 137 workers, among them the union president and general secretary, who are being punished for their union activities. They are accused of being leaders of an “illegal organization” — the KGEU.

President-elect Park Guenhye, who will take office on 25 February, has pledged to achieve social integration. The KGEU is demanding that she recognize the union and reinstate the sacked employees.

The KGEU believes that the reinstatement of those workers is a human rights issue and demands that the government listen to the International Labour Organization which has been urging Korea to guarantee trade union rights including freedom of association for many years now.

Kim will continue his hunger strike until these issues are resolved.

We call upon trade unionists around the world to show their solidarity by sending off messages of protest and solidarity today.

Please show your support by clicking here to learn more and send off a message too: http://www.labourstart.org/cgi-bin/solidarityforever/show_campaign.cgi?c=1693