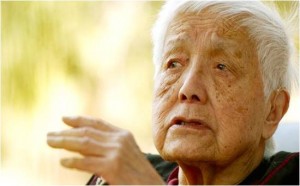 This is a free screening open to the public with admission on a first-come, first-served basis.

Grace Lee Boggs is a 98-year-old Chinese American writer, activist, and philosopher. The documentary carries us through Boggs’s lifelong involvement with many of the major American social movements of the last century, including labour and civil rights, Black Power, feminism, the oppression of Asian Americans, and the issues facing the environment.
Boggs is always dynamic, and has a strategic disposition that drives changes in her approach according to the world around her. Indeed, it’s this aspect of her character that drives the story forward. Angela Davis, Bill Moyers, Bill Ayers, Ruby Dee and Ossie Davis, Danny Glover, Boggs’s late husband, James, and a host of Detroit comrades from three generations help shape this uniquely American story.
As she wrestles with a Detroit in an ongoing state of transition, the inherent tension between violence and non-violence, Malcolm X and Martin Luther King, the 1967 rebellions, and non-linear notions of time and history, Boggs emerges with a sensibility that is radical in its simplicity and clarity: revolution is not an act of aggression or merely a protest. Revolution, Boggs says, is about something deeper within the human experience—the ability to transform oneself in order to transform the world.
Grace Lee is a Los Angeles-based filmmaker well known for her films Janeane From Des Moines (2012) and American Zombie (2007). Her film The Grace Lee Project screened at Reel Asian in 2005.

PRESENTED IN PARTNERSHIP WITH