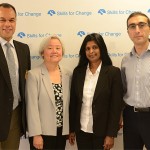 Migrating for a better future for their children, parents make huge personal sacrifices that sometimes take decades for them to recover.

When Toronto Police Services deputy chief Peter Sloly’s parents made the decision to leave Jamaica in 1976, they were successful professionals. Bringing their three boys to Toronto, however, came at a price as they had to give up a lot.

“I watched my mother (she was a social worker) for the better part of a decade struggle with depression about leaving her home, family, friends and career,” said Sloly, who is one of six recipients of this year’s Pioneers for Change (formerly New Pioneer) Awards. “Although she was bringing her kids for a better life, she was losing the best part of her life. My father left Jamaica as a lawyer with over a decade and a half experience as a partner in a major law firm in Kingston to arrive here, in another Commonwealth country, and find that his law degree was not accepted.

“Having arrived with a young family and a limited amount of liquid assets to keep us going, he was told he had to go back to complete his exams and then article again. That was not financially feasible. It was a huge loss in terms of his human capital and it took nearly two decades for him to reach back to a relative level of accomplishment.”

In his acceptance speech after being formally presented as a 2015 award winner, Sloly said more has to be done to capitalize on skilled foreign workers and expedite their entry into Canada for jobs that aren’t being filled by people already in Canada.

“We have an incredibly underemployed and underutilized group of workers driving taxis and doing menial jobs,” he said. “It’s amazing. We have communities that need capacity building, experts, doctors and engineers and yet there seems to be this experience of coming, having being recruited in some cases, only to find out that the ability to actually get through those doors are limited.”

While his parents’ transition wasn’t as seamless as they would have hoped, Canada has been a big beneficiary of their son’s athletic and administrative talents.

Sloly represented Canada in soccer at the junior and senior levels and when an injury cut short his playing career, he turned to policing and made the leap from beat constable to deputy chief in just 21 years.

The senior police officer is being recognized in the Excellence in Community Engagement category. He was the executive sponsor of the Police & Community Engagement Review (PACER) undertaken to re-evaluate the way in which law enforcement engages with the community. “One of the things that bind us together as recipients is courage to try to make difficult changes in a complex society like Canada,” said Sloly. “I believe that policing is at a crossroads. I believe we need courage and we need change and I will continue to do my very best within the policing context to provide that courage and make that change.”

Storyteller and businesswoman, Itah Sadu, is being honoured in the Excellence in Entrepreneurship category.

She and her husband, Miguel San Vicente, took ownership of A Different Booklist 19 years ago from Dr. Wesley Crichlow, a tenured associate professor who sold academic books that appealed to his Caribbean-Canadian gay and lesbian studies.

Sadu was unable to attend last week’s reception as she was at York University celebrating with graduating high school students. Three years ago, she conceived the idea for a one-kilometre walk that started at C.W. Jefferys Collegiate Institute and concluded at York University with a celebration that included the presentation of medals, dancing, drumming and singing.

Skills for Change administer the awards that have been bestowed on 121 immigrants since 1993.

“Pioneers for Change represent the vision of a diverse and inclusive Canada,” said Skills for Change executive director, Surranna Sandy. “It is an ongoing commitment to identify the achievements of immigrants as well as breaking down barriers so that newcomers not only succeed, but thrive. Pioneers for Change are nation builders, incredible people who have made a significant and lasting contribution to Canada. As nation builders, they inspire newcomers to work towards their own success and follow their vision. They are exemplary citizens who have an immigrant story to tell.”

Proceeds accrued from the fundraiser will go towards programming for immigrant women and young people and help to launch the centre’s immigrant women breast cancer awareness program.

“This exciting new initiative will build on relationships between and across women to increase newcomer women’s knowledge of female-specific health issues and provide women with the tools they need to ensure that they become capable of conducting breast self-examinations and seek available medical treatment,” said Sandy.